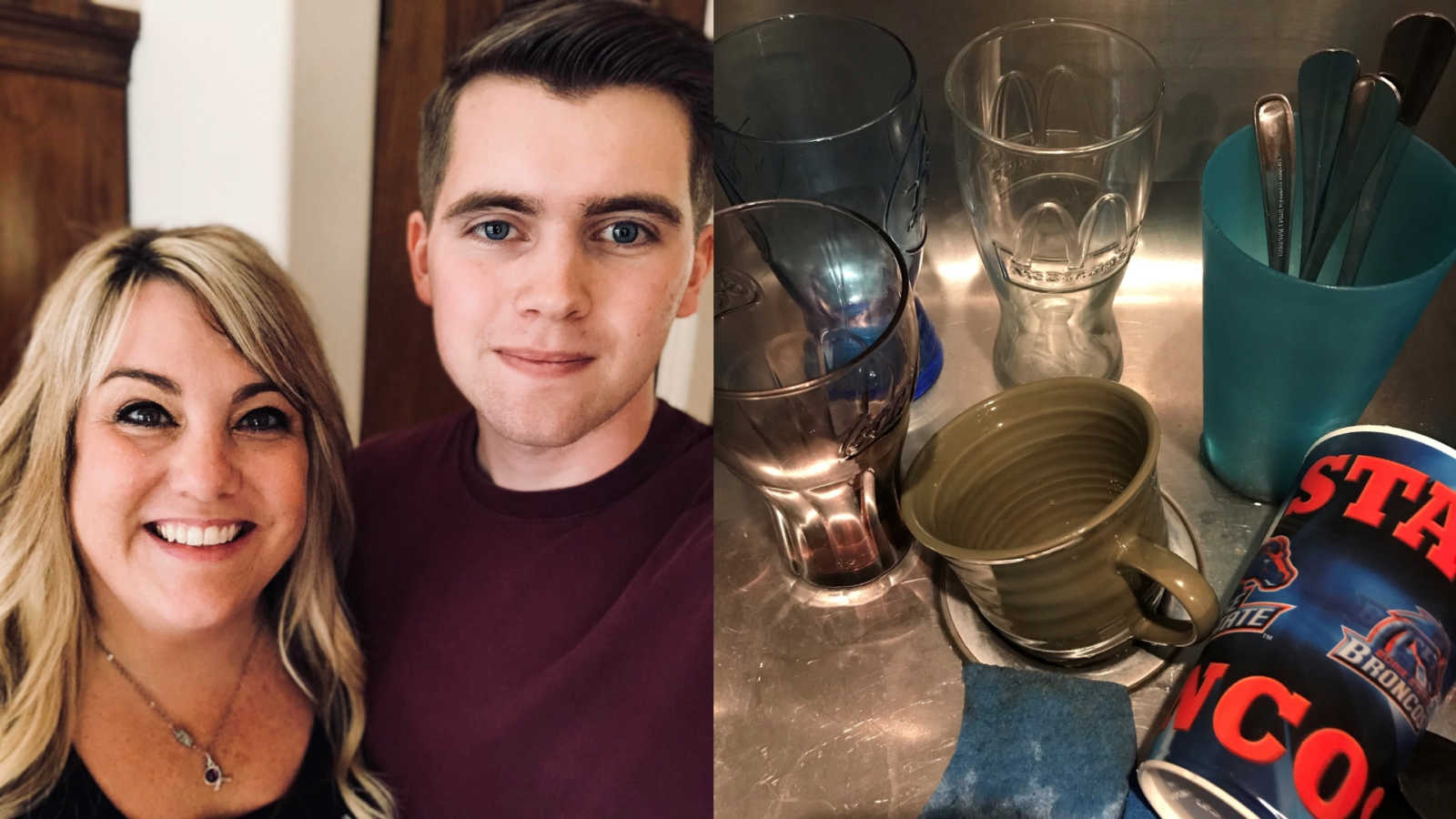 “I took my family on a field trip once. I told them to get dressed, brush their hair, put on good, firm walking shoes, and gather up whatever they needed to be comfortable. Once I gathered them in the living room, made sure they were all set and ready to go, we embarked on our adventure. Straight to the dishwasher.

For a minute, they were confused. I smiled at their quandary. I had evil, secret thoughts of happiness in my black heart. I could see the look of disgust on their beautiful faces as they slowly put my scheme together in their heads. The clearer it became, their faces changed, and their arms folded. I gave them a crooked grin. I probably winked.

Then, one night, I came home from work. A long, 12-hour shift. Exhausted, I stumbled into the bedroom, changed from my work pants to my yoga pants and tied my hair into a messy bun. I wanted a hot bath. I wanted some sleep. But, first, a nice glass of wine to take the edge of the day off.

Oh, how I wished at the moment I walked into the kitchen that I actually used my yoga pants for yoga. Oh, how I wished I knew how to do relaxation breathing. The only time I ever learned how to ‘breathe through’ something was when I was in labor and by the time my cervix was opened to a 4, there was no calm breathing, just screaming and f-bombs. This situation was no different.

‘Ok,’ I told myself. ‘Breathe. Breathe like they showed you in Lamaze.’Hee, hee, ha, ha, ho, ho.‘Maybe the dishwasher is full. Maybe he had to go rescue a baby animal somewhere. Maybe he twisted his arm carrying it all to the sink and he had to go to the emergency room.’ I flung open the dishwasher. Empty. EMPTY. I screamed.

‘What’s wrong? What happened? Why are you screaming?’ He was worried.

Fire burned in my eyes.

I pointed to the sink.

‘You DON’T know?’ He shrugged his shoulders. He might have smiled. ‘Alright, that’s it. That’s IT! I will show you ‘I don’t know.’ You’re going to be sorry. I have HAD IT.’

I don’t even know what he said, if he even said anything. I blew past him and into the garage, grabbing the first storage bin I could find. I wrestled with it while I dragged it through the laundry room and over the heap of towels that somebody left on the floor. By the time I got back to the kitchen, he was gone, and in his place was my husband.

He knew better than to say another word. He watched, silently, while I packed the dishes. He said nothing as I loaded the container with our plates, bowls, cups, silverware. Everything. I packed the entire kitchen.

When I was done, he addressed it. With his eyes wide open, he leaned in and whispered, ‘What are they supposed to eat off of?’

I found the man a coffee cup. In his car. In a cardboard box where he stored them after he took them to work. 25 of them. On occasion, I would find that box on the front porch, like he was leaving me a gift. Well, buddy, you can’t have them all, but you can have my ‘Tinkerbell’ coffee cup. I think it eventually became his favorite.

Maybe my youngest daughter was too young to remember this incident, because just today,yes just today,她问我是否可以为厨房打扫厨房。等待。您的意思是您想清理烂摊子，让我付钱吗？钱？而不是给您屋顶和食物吃饭？不。

My husband was better with the kids. Way more patient. Much more forgiving.

Until that one night.

I don’t know why, but when my kids would need to get something out of a cabinet that was mounted on the wall, they would climb up onto the counter, open both cabinet doors and, in an effort to hold themselves up, they would often (and it better have been subconsciously) pull back on the doors to balance themselves. I never thought much about it until, one night, I heard a crash and subsequent screaming.

Oh, for the love of all that’s Holy, what now?

我跟着尖叫的声音,漂亮的进行dent that nobody was dead since he was still yelling. What I found was my son, on the counter in the laundry room, with all of the contents of what used to be in the cabinet on the floor below him. Art supplies. Glue. Glitter. Paper. Pens. Popsicle sticks. Batteries. A random video game controller. Halloween blood. A ski pass. A bunch of freaking junk I stashed up there. And on top of him, the cabinet, which luckily, when it came down, hit the wall behind him and, thankfully, didn’t crush him. Yes, friends, after all those years of hanging on it, it finally came unhinged, pretty much like me. I knew I had to help him although I did quickly calculate how long he might be able to stay in that position, holding up the cabinet, before he fell. I took position under him, held up the cabinet myself so he could get out, and what do you think he did?

He left me there.

So, at that point, I am holding up the cabinet, trying to balance my footing on some old phone book on the ground. I have one free hand. Barely. I manage to reach my cell phone and type out a quick message to my husband, who was at work. As a police officer.

I meant to follow up with something like, ‘I just need you to lift something.’ Or, ‘The cabinet fell, and I can’t get it back up.’ Or, ‘Just need your help really quick.’ That would have been great but, as soon as I finished the first text, of course the phone fell, on the floor, out of my reach and there was no way I was letting go of the cabinet to try to get it. And, for some odd reason, nobody came running to help me. But, maybe, that was because in all the commotion, somehow the laundry room door shut, and nobody could hear my muffled screams. My husband never texted me back. After about 5 minutes, I was sure I was going to meet my untimely death when the cabinet came crashing down on my head. This wasn’t the way I wanted to go. No, I had big plans. At least let me be trampled while drunk on vodka, dancing in the streets during a Carnival in Rio de Janeiro or something. Not this. Not crushed by a cabinet. In the laundry room. Are you kidding me? Dying in the laundry room? The laundry room has already sucked out my soul and now it wants to take my life, too?

Because just then, just as the back door swung open, the front door did as well, and the deep voices of many men came ringing through the house.

You have got to be sh*tting me.

He and his buddy lifted it off. His friend was trying to help without giggling. That was working until the last little bits of glitter came tumbling down on my head when they moved it.

My husband still didn’t break a smile. I tried to give him sad, puppy eyes, but still, nothing. They carefully placed the cabinet on the floor in the kitchen.

Oh, how I wish I had given him a better coffee cup.

说到咖啡杯,它工作。它确实。Because a month after I packed up the kitchen, I was lying in bed, watching mindless reality shows, when my son came in, sat down and quietly told me he had a question for me.

I composed a list of chores in my head as rainbows appeared in my room and unicorns danced around in delight.

Yes. My work here is done.”

This story was submitted tobeplay网络一直不畅by戴安娜登记册of Meridian, Idaho. Her book, “My Kid Is an Asshole, and So Is My Dog” is now available in print and kindle.You can follow her work on her authorFacebook page。自己提交故事这里并在免费新闻通讯中订阅我们的最佳故事这里。

Read more of Diana’s hilarious stories of parenting a teen:

“They don’t tell you you’re going to cry. A lot. You dropped that pacifier on the floor? Might as well throw in the towel. According to your postpartum brain, your partner will NEVER do it right. Your ‘friends’ will drop you like it doesn’t even phase them. You’ll check your baby’s breathing every few minutes. Whether you breastfeed or formula feed, it hurts. Someone will always have something to say.”

‘The eyes staring back at me were MINE. ‘I can’t believe I actually found you!’: Birth mom finds son on Facebook after 33 years

“‘This is like a DREAM. There are a million things I want to say, and at the same time, I can’t find the words. Just know I love you.’”

‘Last night, I held my phone so a wife could FaceTime her husband as he passed from COVID complications.’: Nurse urges ‘please consider your neighbors before airing your opinion’

“‘Thank you for being the best husband and father.’ She talked to him like none of us were in the room. She told him all the things she was going to miss without him. Although he couldn’t respond, you could see in his eyes he knew her voice.”

‘I’m not scared to die. I’m scared to be forgotten.’ I had no words, just tears.’: 28-year-old widow gets sign from husband in heaven, ‘I’m okay Mama Bear, I made it, I’m now pain free’ 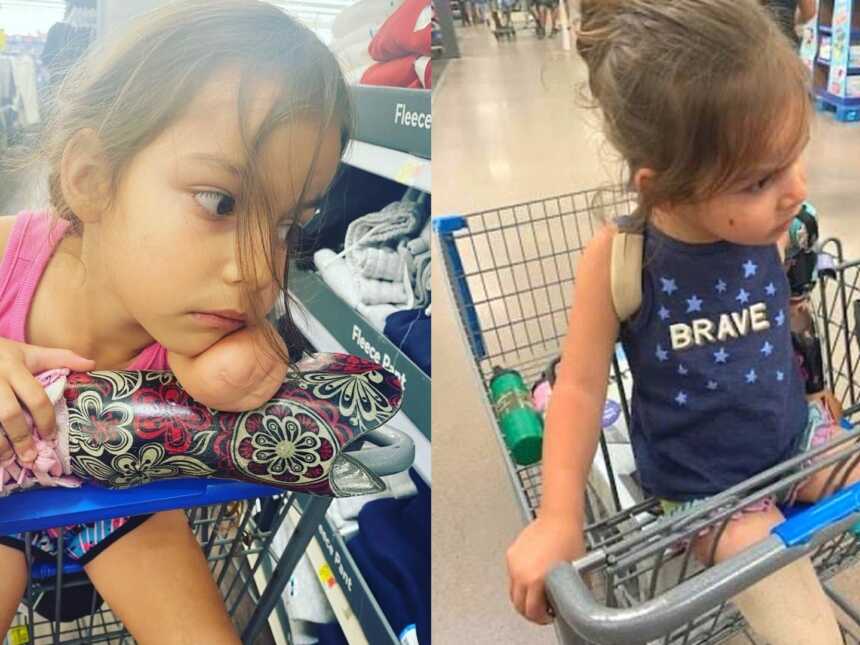